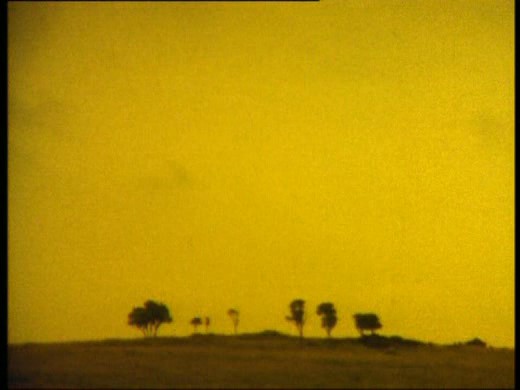 The camera makes everyone a tourist in other people's reality, and eventually in one's own. -- Susan Sontag

This month's Liminal Images programme will explore the idea of travel through cinema. These experimental films and videos will deal with locality and a sense of the other; whether ranging from Kubelka's distinct separations to Belson Shimane's absurdist juxtapositions, all of these explore the power of the camera to transport the viewer into a new reality.

Unsere Afrikareise [is a film] whose images are relatively conventional ´recordsª of a hunting-trip in Africa. The shooting records multiple ´systemsª — white hunters, natives, animals, natural objects, buildings — in a manner that preserves the individuality of each. At the same time, the editing of sound and image brings these systems into comparison and collision, producing a complex of multiple meanings, statements, ironies... -- Fred Camper

The Man Who Could Not See Far Enough
Directed by Peter Rose
USA, 1981
33 minutes (link)

The man who could not see far enough (1981, 16 mm film, color, sound) uses literary, structural, autobiographical, and performance metaphors to construct a series of tableaux that evoke the act of vision, the limits of perception, and the rapture of space. Spectacular moving multiple images; a physical, almost choreographic sense of camera movement; and massive, resonant sound have inspired critics to call it "stunning" and "hallucinatory.

Odds & Ends is a sly comment on the collage film and Beat culture. To discarded travel and advertising footage found at a local film laboratory, Belson Shimane added a mélange of animation—assemblages, cutouts, color fields, and line drawings—and faux hipster narration by Jacobs (credited via the anagram Rheny Bojacs) punctuated by a bongo backing. Strung together with doublespeak and non sequiturs, the monologue skirts the edge of nonsense as Jacobs waxes on about poetry, jazz, “reaching the public,” “having a good time,” and—although “money doesn’t count”—the “possibility of subsidy” through grants.

Traveling: moving from one place to another, a journey, a path that is taken. From Rome, the ancient, monumental and tourist city; to a town in the countryside near Brescia; to the final destination, Cannes, where eccentric figures stroll along the sea awaiting night, and a crowded Croisette welcomes Francis Ford Coppola’s THE CONVERSATION.

A JOURNEY TO AVEBURY, his 1971 silent short movie, is a literal journey that we can experience. We are being taken to Avebury and given the chance to admire it for 10 minutes. The shots are incredibly beautiful, as we see a huge stone or trees bathed in orange light of sunset.

"Alaska by Dore O. is a beautiful film, which makes it at first glance a bit suspect. But the beauty has a catch to it - it exists only on the surface, beneath it hide horror and fear.
For Dore O., beauty is a part of reality. For her there exists a beauty in fear in the same way that for Genet there exists a beauty in murder. Alaska is a filmed dream, but devoid of the simplistic metaphors taken from psychoanalysis, metaphors which rationalise dreams and thus mistakenly facilitate their interpretation. Alaska is a film which cannot be interpreted, it can be experienced. - Klaus Baderkerl, FILMKRITIK, 1969."

Programme for 'Travels and Departures'