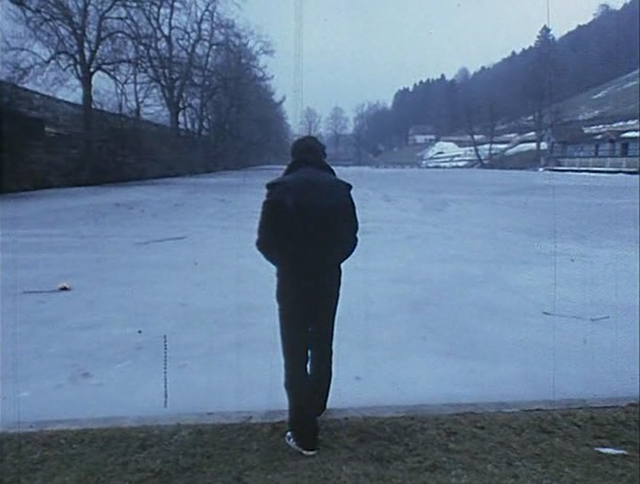 We begin 2012's Liminal Images programme with a selection of films the reflect our January Tallinn environment: films about winter, changing seasons, darkness, growth and changes brought by industrialisation.

Winter Solstice  Directed by Hollis Frampton USA, 1974 33 minutes  "Shot at U.S. Steel's Homestead Works in Pittsburgh,...WINTER SOLSTICE is full of outpourings of fire, of smoke, of sparks, of molten metal--all erupting against an otherwise black background in an activated pictorial space. The complex abstract compositions that flash upon the screen in full-scale explosions of white light or in the aftermath of effervescent sparks reflect Frampton's painterly handling of the camera (hand-held and fluid) and his rhythmic use of color (blue frames are used to mark each cut). While WINTER SOLSTICE pays homage to the work of a number of New York school painters, its steel mill setting represents, as Frampton noted, 'A pretextual locus dearly beloved by our Soviet predecessors.'" --Bruce Jenkin  Senkrecht/Waagrecht (Vertical/Horiztonal)  Directed by Peter Liechtie Switzerland, 1985 5 minutes "In their sequence of movements and events, Roman Signer’s actions are conceived as space/time sculptures. In keeping with the opposing directions taken in these documents, the film is simply called Senkrecht/Waagrecht (Vertical/Horizontal). This oppositional tendency is underlined by the locations: winter/ice/water/summer/clouds/air. The “commentary” to the story is provided by the abstract signs of the sign-language used by the hearing impaired and above all by the music of Möslang/Guhl." Creation Directed by Stan Brakhage USA, 1979 15 minutes "... almost like the Earth itself - the green ice-covered rocks, the slicing feeling, the compressive feeling of the glaciers. The whole time I was watching I kept thinking that you were a master of the North, the arctic landscape - the dark red flowers in the dusky light, the deep blue light, the tall trees with the running mists, and Jane looking ... the ice, the water, the moss, the golden light. A visual symphony ...." - Hollis Melton"   31/75: Asyl Directed by Kurt Kren Austria, 1975 9 minutes "Asyl is one of Kren's most formally ambitious works, an experiment in time lapse photography, multiple exposures, and segmented images... Kren is here reconfiguring film as a medium in which time and space cease to be linear in any sense. The film is instead about totalities; it invites the viewer to think about the progress of time and the way it generally works in cinematic images, and by contrast to process the multiple layered times implicit in each frame of Asyl. This short is Kren's finest work, with a conceptual purity and inventiveness that are unmatched even in his consistently intriguing oeuvre."    ** intermission **   Capriccio Directed by Zoltán Huszárik Hungary, 1969 16 minutes "Shreds and fragments of film poetry that make its own place on the edge of a document film. The film is a college of dialogue between nature, abandoned country, and human fancy. The director with sovereign poetry and a strong sense of grotesque introduces a myth of creation, human finality and continuousness of recovering nature. Huszárik's individual style of merry resignation appears here again with features of particular abstract sensibility. There is an inherent reflection of time, particularly the impossibility of coming back in the picture. Whereas a film by itself main idea is that its existence in the light makes present what can.t return, that film in the light and movement becomes something that can never be alone."   By Night with Torch and Spear Directed by Joseph Cornell USA, 1942 8 minutes "This is the world made strange, an ultimate surrealist statement. Ordinary industrial machinery, seen through a bright pink filter, seems to glow with otherworldly energy, and the men tending to these strangely vibrant, effervescent industrial playgrounds are like sorcerers, conjuring inexplicable phenomena ... Cornell sees the cinema as a transmitter of poetic distortions, as a massive bank of images to be combed for magical moments, moments that can be amplified and reworked into something epic and unfamiliar. His was a totally original and remarkable cinema, and this short is perhaps one of the finest examples of his unparalleled ability to dig out the strange essence at the core of the ordinary." -- Only the Cinema   Makimono Directed by Werner Nekes West Germany, 1974 38 minutes "Makimono is an Asian roll painting depicting a landscape. The subject of the film is the language of film itself, its mutability and its influence on the viewer's vision and thinking. While the film gradually progresses the viewer is gently invited to reflect on the development of the film in its expressive potential."
Resources