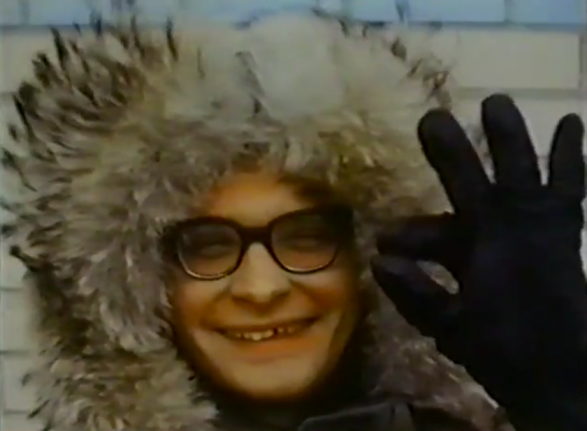 “A very direct and subtle, very sad and funny look at nothing more or less than sexual frustration and aloneness. In its economy and cogency of imaging, HOLD ME surpasses any of Kuchar’s previous work. The odd blend of Hollywood glamour and drama with all-too-real life creates and inspires counterpoint of unattainable desire against unbearable actuality.” — Ken Kelman

“This film could cheer an arthritic gorilla, and audiences, apparently sensitized by its blithely accurate representation of feelings few among them can have escaped, rise from their general stupor to cheer it back.” — James Stoller, The Village Voice

**Eclipse of the Sun Virgin**

"I dedicate this film poem to the behemoths of yesteryear that perished in Siberia along with the horned pachyderms of the pre-glacial epoch. This chilling montage of crimson repression must be seen. Painstakingly filmed and edited, it will be painful to watch, too." — George Kuchar

"Since this was Jane and Lloyd's first big acting roles, I made the music very loud so it would sweep them to stardom. She once hurt Bob Cowan's back by sitting on it so this time I had her laying on his stomach. Donna Kerness was pregnant during her scenes but her stomach was kept pretty much in shadow and it's not noticeable. My stomach was the same as always except it contained more mocha cake than usual since that type of cake was usually around when I filmed in Brooklyn Heights. Being that the picture was made in the winter, there are no outdoor scenes because it's too cold and when the characters have to suddenly flee a tense situation, it's too time consuming to have them put on a coat and gloves.

Originally not scheduled as a tragedy, things swiftly changed as the months made me more and more sour as I plummet down that incinerator shaft I call my life." -- George Kuchar

"Co-directed with Marion Eaton (who also stars), George Kuchar’s A Reason to Live is a hilarious and wonderfully evocative noir — not quite an homage, a pastiche, or a parody — in opulent, silvery black and white. Kuchar also follows Jack Smith (and, of course, many others) with beautiful, ersatz Von Sternberg lensing (with lots of foreground distraction and soft focus). Kuchar even references JVS’s Anatahan with the tactic of using silver-painted foliage, maximizing the shimmering cinematic gawdiness." -- KG

"This film was shot in ten minutes with four or five students of mine at the San Francisco Art Institute. It was to be a screen-test for a girl in the class. She wanted something to show producers of theatrical productions, as the girl was interested in an acting career. By the time all the heavy equipment was set up the class was just about over; all we had was ten minutes. Since 400 feet of film takes ten minutes to run through the camera … that was the answer: Just start it and don’t stop till it runs out. I had to get into the act to speed things up so, in a way, this film gives an insight into my directing techniques while under pressure." -- KG

"This is a great little short by the man that brought us "Hold me while im naked" and "Thundercrack". It's two film's in one for the most part but it works. He was approached by the "Horray for Kids" (oh dear) people to film a convention, needless to say what they got was hardly suitable for children. With great sound bytes from 50's romance records , as his quirky technique he produced a film more about the break up of marriage and the death of his children and wife in a car crash (not based on fact) , the car being driven by a shop dummy "A motor car has too big eyes too see where it is going and if you dont use your own big eyes you know where you'l be going" is sung heartily as the threesome become roadkill , done with a great slow mo of a kiddies three wheeler falling to the ground. There is so much compacted into the twenty or so minutes that I cant do it justice so track it down and have a look at what im going on about." -- a random IMDB user comment

"A nice look at George and his dog Bocko. Bocko starred in several of George's films and here is seen cavorting outdoors with the film maker Curt McDowell. He is also seen indoors with George. George shows Bocko some of the outdoor footage and comments on it, reminding him of the places they had visited. A wonderful film in beautiful color." -- KG

Programme for George Kuchar night This handout was distributed at the Kuchar tribute night.