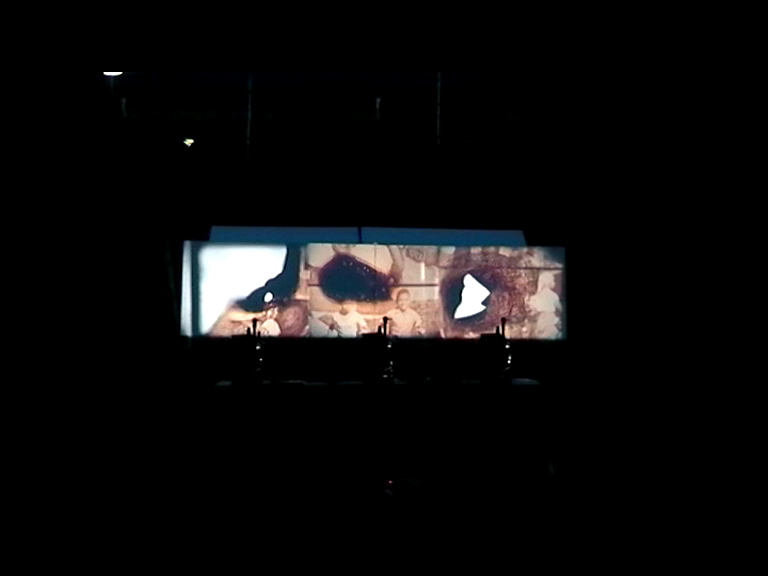 Plucié/Des Andes are film artist Marek Pluciennik and sound artist James Andean. Together they have developed a unique audiovisual performance practice, drawing on the diverse background each has in their respective fields, seamlessly blending film, sound art, and performance art.
Marek Pluciennik emphasises the tactile qualities of film, not just as a vessel for content, but as a material medium, by treating and transforming the film during the act of projection, most commonly by melting and burning the film as it is projected on the screen, as well as through the digital capture and transformation of both materials and process. The visual results are thus a combination of the film content, and the beautiful, strangely transfixing display of colour and texture as the film bubbles, melts, and dissolves. The results capture the transitory, ephemeral nature of experience, art, and performance, as images, scenes, narratives, and people melt away on the screen. Pluciennik's live treatment of the film extends into the digital – as these physical metamorphoses are recaptured, digitally treated and transformed, and projected anew – and also into the realm of performance art, as his methods are played out in front of, within, and around the audience, sometimes requiring the participation of audience members, and often extending into broader metaphors of performance action.
James Andean creates live soundscapes to accompany and dialogue with the projected visuals. These soundscapes are often centred on live, site-specific sound, using the sound artefacts of the venue, the space, the audience, or the film projection as primary sound materials, to be further developed and extended live in the spontaneity of performance, creating a soundworld which once again stresses the fleeting impermanence of the experience of live art. Once again, these live, physical elements are captured, digitally extended and transformed, and projected as fantastic constructs moving out from their foundation in the here-and-now and out into broader realms of sound.
These two layers – the sonic and the visual – combine and react, to create a unique, beautiful experience of shifting images, scenes, colours and textures, from both screen and loudspeakers.